In this tutorial we will write tests for a Celo smart contract.
Writing tests is an important part of smart contract development because smart contract vulnerabilities can have real world implications like losing user funds! The best way to try to mitigate vulnerabilities is to write extensive unit tests in order to test every part of our contract's functionality.
This is a beginner friendly tutorial. Read on to learn about testing!

Next, we're going to setup our project. Let's create a folder called celoTesting and cd into the folder:
mkdir celoTesting && cd celoTesting
Now let's initialize Truffle:
truffle init
There should now be a handful of files and folders in your celoTesting directory. Let's open celoTesting with your favorite text editor and continue.

Now that we have a smart contract, let's deploy it to make sure it works. We'll be deploying it on the Ganache CLI, which is a command line tool for creating local blockchains. Ganache will create a local Ethereum blockchain for us to test on. Since Celo is a fork of Ethereum, they use the same environment.
To spin up the local blockchain, in a new terminal window run:
ganache-cli --port 8545
We use a new terminal window since we'll want to keep Ganache running while we develop.
Next, replace the existing contents of truffle.config with the following:
This will simply use the Ganache environment whenever we deploy or test our contracts. Our Ganache environment is running on localhost (127.0.0.1) and using port 8545.
We'll also want to create a migrations file for our smart contract to deploy from. Create a file and call it 2_helloworld_migration.js inside the migrations/ folder and write the following:
After all that, we can run truffle migrate in our terminal to deploy our contracts.
The results should look like this: 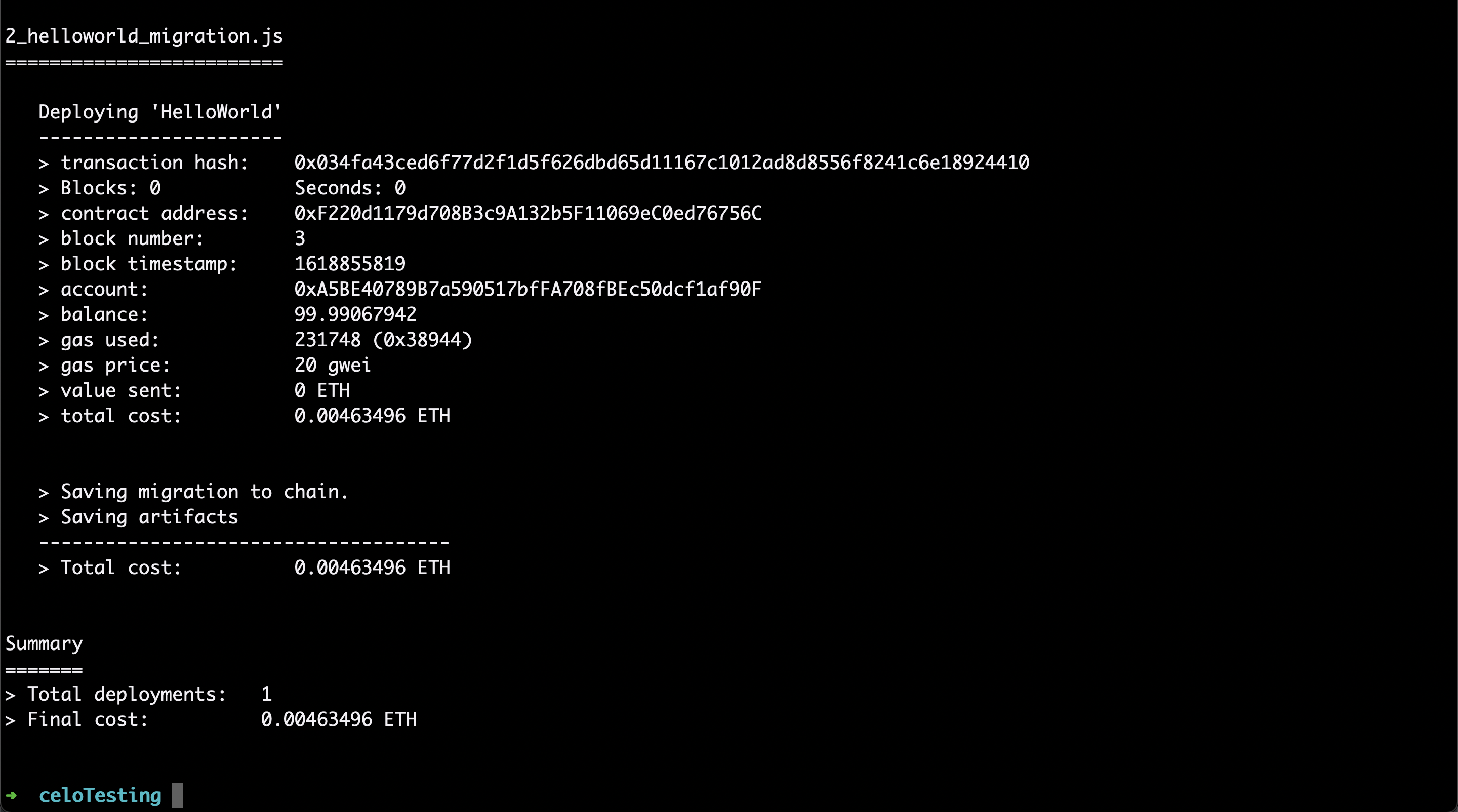 Truffle lets us test our smart contracts using both Javascript or Solidity. For this tutorial, we will write tests in Javascript.
For Javascript tests, Truffle uses two testing libraries commonly used in Javascript development. By default, this is the Mocha testing framework and Chai for assertions. A great thing about truffle is we are free to use whatever testing framework we want, but for our purposes this works well.
An important thing to note about testing in Truffle is that whenever we run the tests, Truffle will create a new contract deployment. This means we get a fresh start whenever we run our tests, and our contract gets reset.
Moving on to development, in the test/ folder create a new file called helloworld.js.
The first line we'll write will get our smart contract instance:
const HelloWorld = artifacts.require("HelloWorld");
Next, let's setup our testing file:
Before we write our tests, let's review the goals of writing unit tests. A unit test should:
Let's test that our contract returns "Celo" from getName() in our HelloWorld contract. If you'll recall, getName() returns whatever the string inside the name variable is. By default, we set name to be Celo when the contract is created.
In this test, we create an instance of the HelloWorld contract deployment, and call the getName() function on it. The syntax for this is simply instance.getName.call() for calling functions which read from the blockchain.
Next, our test asserts that the value returned from getName() is equal to the string 'Celo'.
Let's run this! In a terminal window (with ganache running), type:
truffle test
This will run all our tests. Our test passes!

Now that we have our first test which tests the getName() function, let's write a test to check setName():
For this second test, we use setName() to change the name variable to "Figment Learn" and then call getName() to check if the variable updated.
In this test, we again retrieve an instance of the HelloWorld contract, but this time we call the setName() function on it like so:
await instance.setName('Figment Learn');
Unlike getName(), we don't use .call(). Whenever we're calling functions that write to the blockchain, we won't need to use .call().
Let's run truffle test again:

Great! This works. The test does take a while longer than the first one because it calls two functions and waits for each of them to finish.
A big part of unit testing is testing the edge cases which could possibly break your code. An example could be using special characters like emojis in our setName() function. Let's write a test to make sure that works:
And finally, let's run this last test:

Woohoo! All our tests pass.

Now we know how to write tests for our smart contracts. This skill will come in handy whenever you're working on a smart contract and need to verify that all of the functionality works. Although our tests were relatively simple, they should be enough to get you started on your testing journey.

After following this tutorial, you should have a basis for writing tests for smart contracts. Unit testing is a entire subsection of development which has lots of discussion around it. If you'd like to read more, here are some additional resources:

This tutorial was created by Alex Reyes. Alex is a student (BS, Computer Science) and crypto enthusiast who's learning all about the world of web3 one day at a time and he's contributing to Web3 communities actively. He has previously completed internships at Facebook and Microsoft.
Table of Contents