This tutorial assumes you are familiar with Avalanche's architecture. Also that you have followed the tutorial Make an e-Voting dApp on Avalanche Fuji testnet.

Open a new terminal so that we can create an advanced-evoting directory and install the package dependencies.
First, navigate to the directory within which you intend to create your advanced-evoting working directory:
Create and enter a new directory named advanced-evoting:
Initialize the folder with npm:
This command would prompt the user to enter the details about the project like name, description, author etc. You may either enter details as directed and press enter, or accept defaults & move ahead by pressing enter.
Now use npm to install other dependencies
Lastly, create a boilerplate Truffle project with:
This will setup our initial project structure. Smart contracts will be stored in the contracts folder, deployment functions for migrating smart contracts to the network will be stored in the migrations folder. And build/contracts folder would contain information about the deployed contract, ABI etc.
Update truffle-config.js
One of the files created when you ran truffle init is truffle-config.js. Replace the existing contents of that file with the following code :
Note that we're setting the gasPrice and gas to the appropriate values for the Avalanche C-Chain.
Add .env file

References : Few parts of this tutorial has been made by taking reference from Dapp University.
In the contracts directory add a new file called Election.sol and add the following block of code:
Election is a solidity smart contract which lets us view the name, description, about the candidates standing in an election and voting them. In this DApp, we will be accessing these runtime deployed election smart contracts using their address and ABI. This smart contract will be deployed to the blockchain, each time we create a new election.

Solidity smart contracts are defined by the contract keyword, which is very similar to a function signature. Therefore, the code for this smart contract is everything within contract Election { }.

Any time you make a change to .sol files, you need to run truffle compile.
You should see:
Note : There might be an error Error: Cannot find module 'pify', if the pify module is somehow not installed automatically while installing truffle. So, this issue can be resolved by separately installing pify, using the command npm install pify --save
Compiling the smart contracts would create .json file in the build/contracts directory. It stores the ABI and other necessary metadata. ABI refers to Application Binary Interface, which is a standard for interacting with the smart contracts from outside the blockchain as well as contract-to-contract interaction. Please refer to the Solidity documentation about ABIs to learn more.

Fund the account and run migrations on the C-Chain

When deploying smart contracts to the C-Chain, it will require some deployment cost. As you can see inside truffle-config.js, HDWallet Provider will help us in deploying on Fuji C-chain and the deployment cost will be managed by the account whose mnemonic has been stored in the .env file. Therefore we need to fund the account.
Fund your account
Fund your account using the the faucet link https://faucet.avax-test.network/ and pasting your Fuji's C-Chain address in the input field. You'll need to send at least 135422040 nAVAX to the account to cover the cost of contract deployments. Here nAVAX refers to nano AVAX, which is one-billionth of an AVAX token. Minimum AVAX required for deployment, will vary from contract to contract, depending upon what variables and data structures our contract is using. Though funding through faucet would give you enough AVAX to run multiple deployments and transactions on the network.

Now everything is in place to run migrations and deploy the MainContract:
This might take a while depending upon your internet connection or traffic on the network.
Note - For development purpose, we may deploy our contracts on local network, by running Ganache (Truffle's local blockchain tool) using the command:
On successful execution of this command, you should see:
If you didn't create an account on the C-Chain you'll see this error:
If you didn't fund the account, you'll see this error:
The information and ABI of the deployed contract is present in the /build/contract directory as Election.json. Information like the contract address, network info, etc. could be found here.

Building the UI for interacting with the blockchain 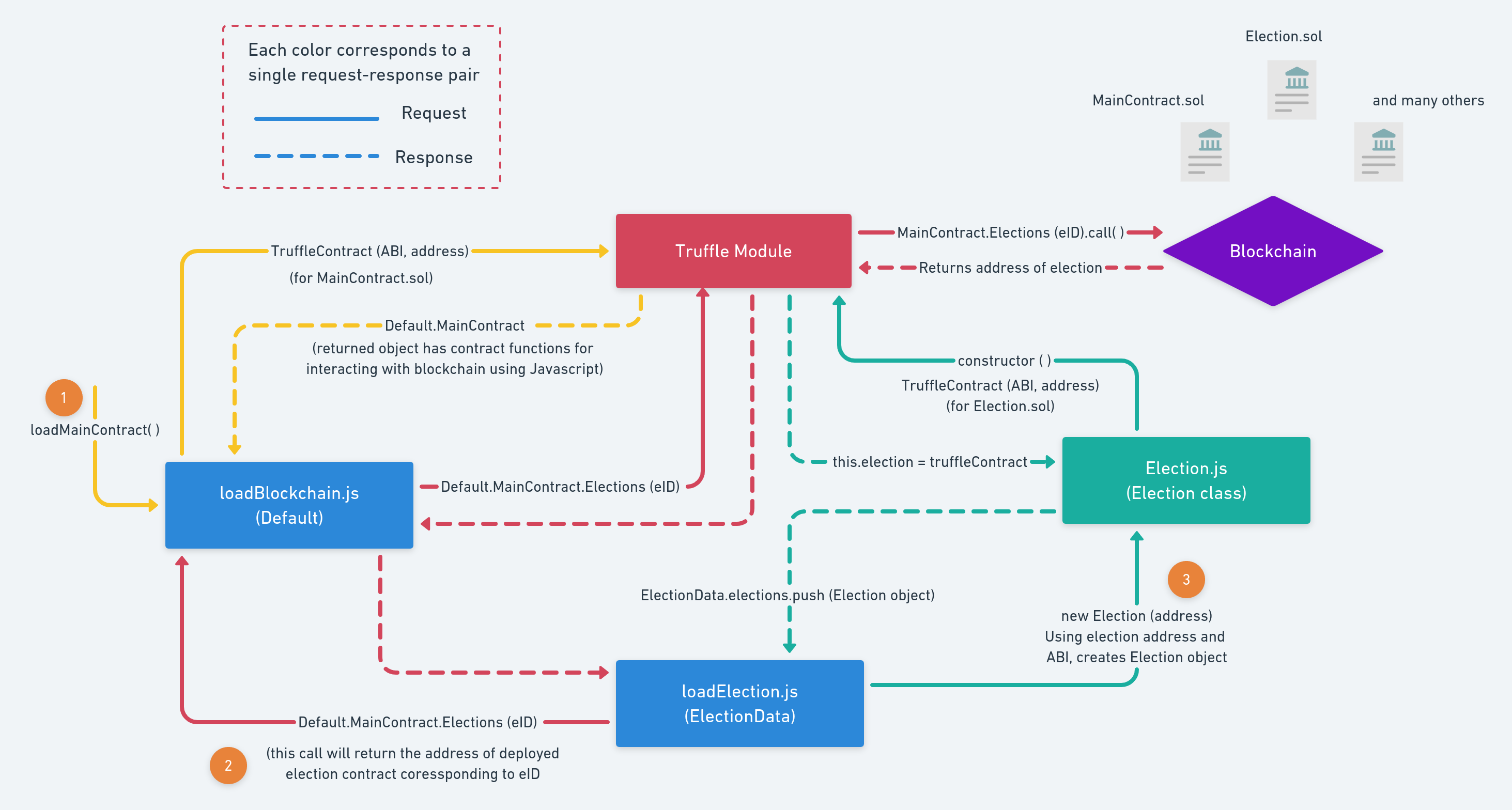 Now run the command node server.js in the src directory to start the server!

Congratulations! You have successfully built a complete dApp and deployed the smart contract on Fuji testnet using Trufflesuite. Along with that, you have also built the client side application for interacting with the network.

The dApp which we built in this tutorial is an e-Voting application, used to make new elections, give them titles and descriptions & vote on them separately.
For further learning, we recommend that you experiment and add a few more interesting features to it, like having start and end dates for elections, declaring winners after the election has ended or any other functionality you can think of!

This tutorial was created by Raj Ranjan. You can get in touch with the author on GitHub